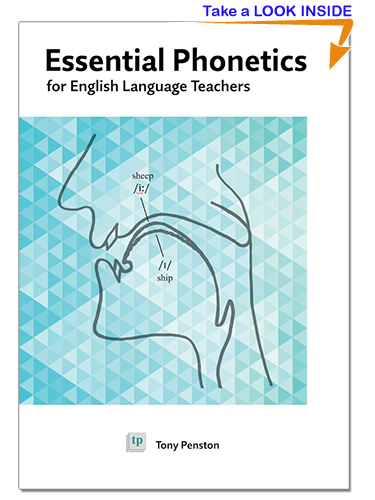 Most English language teachers are ‘afraid’ of phonetics, or mistrust its value as a teaching tool. Essential Phonetics for English Language Teachers was written to allay fears and demonstrate how articulatory phonetics can be used simply and efficiently to identify and correct errors in pronunciation.

To tempt more teachers to take an interest in phonetics this work is in booklet form. Many books on phonetics may appear off-putting because of their size. Also, teachers working in for-profit language schools have scarce extra-curricular time for continuous professional development, so the intention is to show them that a familiarity with articulatory phonetics does not require a large expenditure of time, or money.

Intensive teacher training courses such as the CELTA do have a phonetics input but again time is limited and with the emphasis on language skills and teaching practice there is not always sufficient time to address the subject of phonetics as fully as it might be. Trainees may also be under the impression that phonetics is an extremely academic and perhaps esoteric discipline. This booklet dispels such misapprehensions.

In accordance with TP Publication’s guidelines, Essential Phonetics for English Language Teachers has been written in a style that does not require academic application. However, readers are envisaged as either having had some introduction to basic terminology from a tutor or having gained some familiarity with the topic during their teaching. Nevertheless, assistance towards rapid understanding is afforded by such innovations as the inclusion of mouth images with lip-rounded vowels, and the generous use of example words with phonemes at all times.

American as well as British English

The author is aware of the fact that so many English language teachers have different accents, and are interested in the differences, evidenced by so many staffroom discussions on the topic. Up to now there has been little by way of practical contribution to this issue. This booklet has bravely gone where no phonetics book has gone before: it has presented vowel charts for both British and American vowels, despite the fact that, as Penston says, American phonologists or publishers don’t quite agree on a standard American vowel system (thus there may be an implied reasoning as to why many American teachers eschew phonetics in their teaching). Also included are references to Irish English, Scottish English and other accents.

This booklet should appeal to teachers who may have multilingual classes, for whom dedicated pronunciation lessons would not be suitable, or who may have monolingual classes but prefer to follow the coursebook and as with the former context just correct mispronunciations where such is appropriate during the lesson (during ‘controlled practice’, during reading aloud or occasionally during other teacher-student interaction). Of course, ideas for and examples of dedicated pronunciation lessons are given but the reader is advised to access other materials if this is their main requirement.

There are diagrams of the vocal tract, vowel charts, etc, and some readers may wish to copy and project these during lessons. If so, they should contact the publisher for permission. However, the author urges the reader to learn to draw the diagrams on the board; they are not complex, and the author explains the benefits of doing this, which are more than first assumed.

This is not a book about phonemes, it is a book about how to identify and correct errors with confidence. Only where phonemes play a part in this process are they highlighted. The reader is expected to know how to pronounce any English word or sentence fluently, thus there is no audio accompaniment. However, directions to internet sites where phonemes and more can be heard are included.

RP (Received Pronunciation), otherwise known as ‘posh’ British English pronunciation (formerly ‘BBC English’), has for some time been regarded as the standard British English accent. Arguments have often been made against it, especially the one which truthfully claims that only a minority of people in Britain actually speak with such an accent. However, it has functioned as a clear reference system in dictionaries and phonetics publications. Lately there has been a move to change the abbreviation to GB (General British pronunciation), which although retaining the status of the standard would not be designated solely along ‘prestige’ accent lines; it would also correspond to GA (General American pronunciation) and be instantly recognizable. The author concurs.